What is assisted hatching – AH?

Assisted hatching (AH) is a procedure performed in in vitro laboratories by experienced embryologists. It consists in making an incision in the embryo’s zona pellucida before it is transferred to the uterine cavity. The procedure is intended to make it easier for the embryo to break out from zona pellucida during implantation.

In its early stage, the embryo is surrounded by an outer membrane called zona pellucida. It protects the embryo from external factors before it reaches the blastocyst stage. During a normal development, blastocyst expands and presses the zona from inside, until it breaks. Further expansion of the blastocyst makes it easy for it to leave the zona completely. This phenomenon is called blastocyst hatching. The embryo which is trying to break out from the zona increases its volume, which allows it to access substances secreted by the endometrial cells and to get into direct contact with the uterine mucosa.

If this outer layer is thick and hard, the proper hatching of the embryo during implantation is impossible. Such situation can happen both in the natural process of fertilization and during the IVF cycle. The embryo is then somewhat trapped inside the zona and cannot implant.` 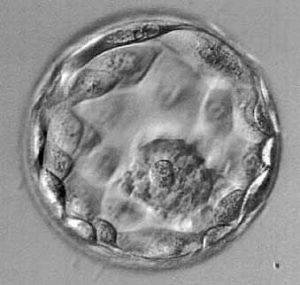 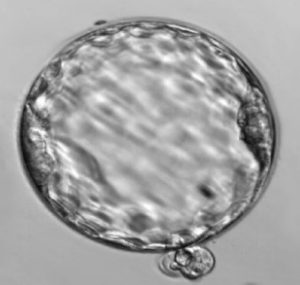 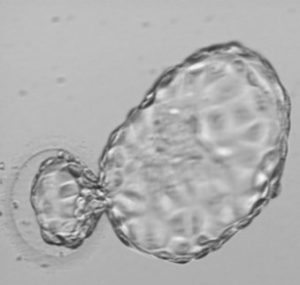 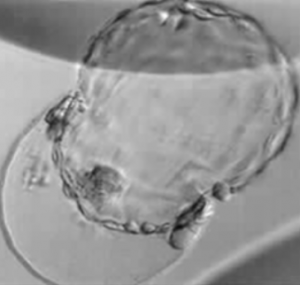 Picture 1.  Stages of embryo hatching: A-D blastocyst hatching out (day 5), E – blastocyst after breaking out from the zona and zona pellucida left behind.

When to use Assisted Hatching?

This technique can increase chances of the implantation of the embryo when the excessive thickness of the zona prevents the embryo from hatching out naturally. It is recommended for use in both fresh and frozen cycles.

This technique is indicated in:

Literature data indicate that this method is valuable in case of frozen embryo transfers. Embryo freezing and thawing may cause zona hardening.

Picture 2. Thickness of the zona in case of an embryo from frozen cycle (A-B) and from fresh cycle (C-D).

Zona pellucida may be opened with mechanical techniques, chemical techniques (acidic solutions or proteolytic enzymes which break down the structural proteins forming the zona) or laser.

The AH procedure is most often carried out on day 5 of embryo development, when the space between the embryo and the inner wall of the zona is still quite large (this has a great impact on the performance). In the case of frozen cycles, the procedure is carried out in thawed blastocysts when they are still shrunk.

What does Laser-assisted Hatching consist in?

This technique consists in using infrared laser beam to create an incision in the zona. The incision forms in the result of protein denaturalization on a small area of the zona, in the place where energy during a laser shot will be released.

The picture below shows the site of the laser shot marked with color circles (A). The light beam emitted by laser is invisible to the human eye. In order to make an incision, several laser shots are made, until a small opening appears on the zona (B). 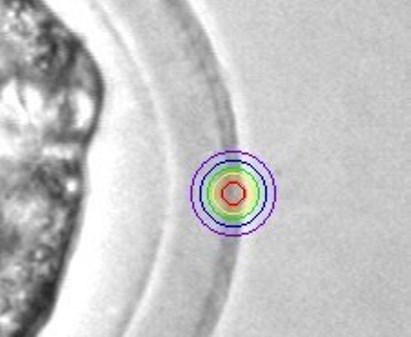 Picture 3. Color circles marking the area on the embryo’s zona hit by laser beam during the application of laser-assisted hatching technique (A). Place of created incision (B).

What is the risk associated with AH?

The rate of complications is minimal, but the risk of damage which may lead to the total loss of the embryo cannot be totally excluded. There are also scientific reports suggesting that AH can increase the chances of obtaining a multiple monozygotic pregnancy with a typically somewhat more complex course.

What is the effectiveness of this technique?

Literature data indicate that the effectiveness of embryo implantation and the pregnancy rate increases after the application of Assisted Hatching technique.